Vassilis is CEO and Founder of Zeetta Networks an innovative spin-out company offering Open Networking solutions that monitor, optimise and automate the operations of complex ICT networks to extract greater efficiency and agility while enhancing the end-user experience and reduce the overall networking costs. Vassilis has more than 25 years’ experience in the Telecommunications, Entertainment and Consumer Electronics industry. Before founding Zeetta Networks, Vassilis was VP of Business Development for Samsung Electronics responsible for driving revenue growth and strategic development of Samsung’s Smart TV (OTT) business in Europe. Prior to Samsung, he held executive management positions at British Telecom, Toshiba,

Sriram Rupanagunta  is a co-founder at Aarna Networks, Inc, and heads their engineering team.  Aarna Networks provides commercial distribution of ONAP. Prior to Aarna, Sriram was the Head of India Engineering at Data Center Business of  Western Digital Corp, responsible for the development of ActiveScale product line from India development center. Prior to Western Digital, Sriram was with the SSD based startup Virident Systems (which was acquired by Western Digital). Earlier to that, Sriram was also the co-founder of start up Aarohi Communications which was acquired by Emulex Corporation, and was the Vice President, Technology at Emulex. He lives in Bangalore, India

Dan Pitt has been a leading voice of the Open Networking movement since its inception. He served as executive director of ONF from 2011-2016, launching the concept of SDN into the vernacular, and since 2017 has been senior vice president of MEF (currently retired but active), applying SDN, NFV, Cloud, Disaggregation, and Open Source to the offering of new, dynamic services across a global system of automated networks. Since 2009 he has been an Executive in Residence at the Plug and Play Tech Center in Sunnyvale, California, the world’s foremost startup accelerator, and advises private and public companies to commercialize

Author of 5 books including: 32 Innovation Factors and The Four Elements of Thinking. His book, Renewable Energies in 90 minutes, can be found in the Library of Congress. Ben has been published in the Bell Labs Technology Journal. He holds three patents: 7443804B2, 8755805B2 and 9918232. He is fluent in Mandarin Chinese, American Sign Language and English. He was the Heroclix (Chess like game) World champion in 2008. He has been to 30 countries around the world on 6 continents. Ben holds a Master of Electrical Engineering degree from Purdue University and Ph.D. in Operations Research from Walden. He

Adnan Khan has spent over twenty years of his career in the wireless industry working with operators, chipset vendors, network infrastructure vendors, consumer electronics/handset manufacturers, and test equipment vendors, in Senior Technical and Management roles. He currently heads the Market and Business Development team at Anritsu and manages the strategic direction for Anritsu’s family of wireless and wireline products. His broad knowledge base spans across different wireless technologies including Cellular, Bluetooth, WiFi, and NFC. He is a frequent speaker at multiple wireless conferences and industry events and has authored several articles in wireless technology journals. Adnan holds a Bachelor of 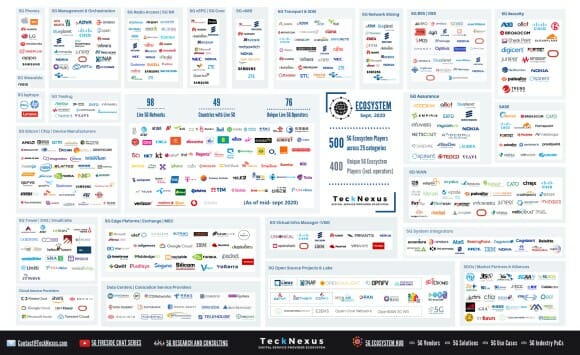 How to join 5G Ecosystem?

We will review the company and product descriptions for consideration into the next monthly update of 5G Ecosystem.

Signup For Our Newsletter

We use cookies to ensure that we give you the best experience on our website. If you continue to use this site we will assume that you are happy with it. To learn more, see our Cookie Policy.OkPrivacy policy